About the Haghartsin Monastery Complex

Haghartsin Monastery is comprised of three different churches, a sepulchre, and a refectory. Most of the complex was built under the patronage of the Bagratuni Dynasty (9th - 11th centuries AD) during the time of the medieval Kingdom of Armenia. In fact, the Monastery was the summer residence for Bagratuni Kings and two of the Kings are found buried within the sepulchre: Kings Smbat and Gagik.

The oldest building on the complex is St. Gregory the Illuminator's church. It was built between the 9th and 10th centuries and is also the site of the first musical university of Armenia. The conservatory was founded in the 13th century by Khachatur Taronatsi, composer of the "Khorund Khorin" hymn which is still a part of the Armenian Apostolic church's liturgy. Khachatur Taronatsi's tomb can be found at Haghartsin. Legend also tells us that during the consecration of this church, eagles were seen playing above. Afterwards, many people started referring to the Monastery as "Hargh(Khagh) Artvsi, roughly translated to "Play of Eagles". Overtime, the name became what it is today, Haghartsin. 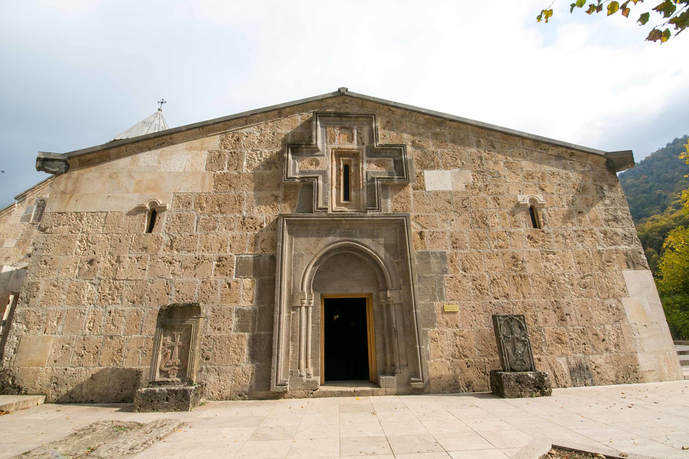 The Refectory found on site is the largest refectory in the country. According to a record found on the wall, the architect was Minas and it was built in 1248 AD. Historically, refectories are found within religious institutions and serve as a place for dinning. Today, the Haghartsin Monastery has long, wooden tables, that were modeled after the ones used in the 13th century, and is filled with pictures of the monastery before it's renovation in in the early 2000's. It is also used today as a space for concerts, conferences, and receptions. 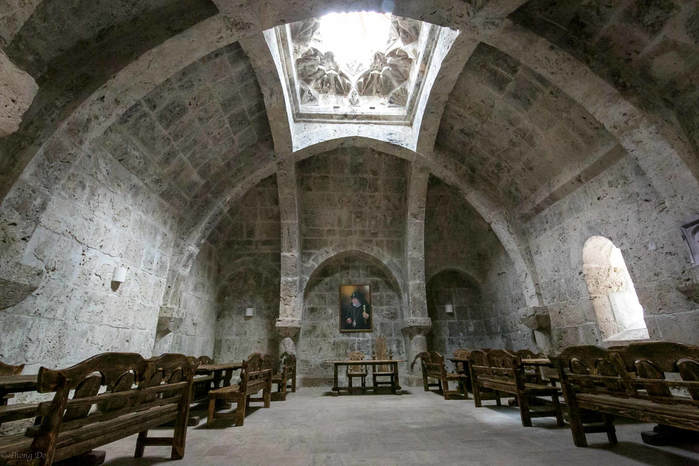 Saint Astvatsatsin Church is hard to miss when you come to visit Haghartsin. It is the largest building and was built in 1281 AD. It's magnificent, 16-faced dome attracts the eye and creates an illusion of weightlessness. Outside of the church, one can find a detailed wall relief of two men dressed in Monk attire, pointing to a church model found between them. It is said that this relief is depicting the founders of the church, the Father Superior and his assistant. 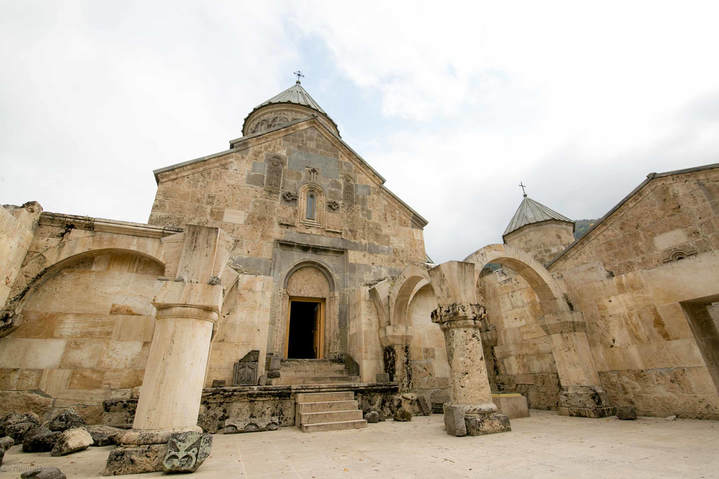 After wandering through the churches and sepulchre, you may find yourself at the back of the monastery overlooking a stunning mountain range while standing next to a truly unique khachqar. A khachqar is a cross engraved on a large stone. They are abundant within Armenia and are most likely found on the sites of monasteries and churches. However, this particular khachqar is unlike any other in the country. It shows a cross whose arms never end therefore creating a double cross. It was carved by orphans who lived within the Monastery during the 13th century and was given as a gift to their teacher. The double cross represents a second life, a resurrection, and shows that even through a tragedy, one can create a new hope. This khachqar is placed next to a tree which was planted by the Zakaryans, over 800 years ago. Although only part of the tree remains today, the stump that is present at Haghartsin has survived lightning strikes, earthquakes, and conflict.
From 2008 - 2009, Haghartsin went through a major renovation by the Armenian Fund. HH Dr. Sheikh Sultan bin Muhammad Al-Qasimi, The ruler of Sharjah, donated the funds that made the renovation possible. ​ 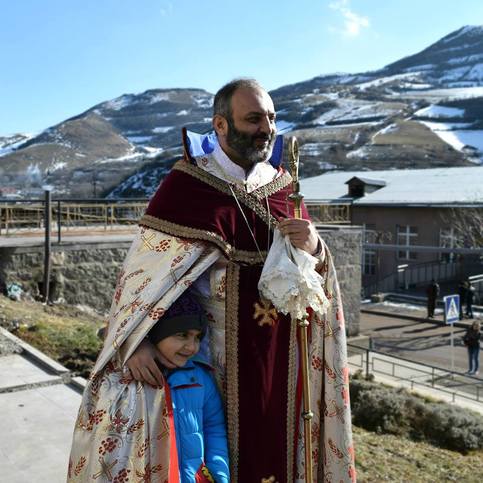 Bishop Bagrat has devoted his life to serving the Armenian Apostolic Church and his country's people. Born in Gyumri, Armenia in 1971, he attended the Gevorgyan Seminary of Holy See of Etchmiadzin and received the ordination of deacon in 1993.
He has been the Director at the Sunday school in the Holy See of Etchmiadzin, was appointed as Vice-President of the Center for Christian Education and Preaching, and was Editor-in-cheif of Etchmiadzin, a monthly, official publication for the nation's primary church.
​In June of 2003, after serving as Vicar General of the Diocese of Aragatsotn of Armenia, and after being appointed Head of the Media, Relations, and Communications Department of Etchmiadzin, Bagrat Galstanyan was elevated to the rank of Bishop. It was around this time that he was also elected to be Primate of the Diocese of the Armenian Church of Canada. In 2013, he was presented with the Diamond Jubilee Medal of Queen Elizabeth II. In 2015, after living and serving in Canada for 10 years, he moved back to Armenia and became the Primate Bishop to the Tavush Region.

Fr. Aristakes and Fr. Samvel ​are the current priests of the monastery.

The people we serve.

Because of the region's location, there are many border-guarding villages that are threatened by violence despite a Cease Fire Agreement signed in 1994. It is a reality for the children of these villages to go to a school with bullet holes in the walls and this has been apart of their history for the past 25 years. However, these families are still going to school each day, living in the homes passed down from generation to generation, and farming their land with hopes of making a living.

The Tavush Diocese does everything in their power to protect and support these families. They currently have 44 Sunday schools with 2,010 students throughout the Region. They also have the ''Arevik'' social-educational center in Ijevan with 54 children from vulnerable families attending, and the ''Paponts Toon'' social-educational center by the Surb Sargis church in Noyemberyan . Each location provides after-school classes for children as well as providing resources in the form of clothes, hygienic products, and parenting classes.

100% of the profits made by the selling of the Diocese's products go towards serving the people of the Tavush Region.